Dave was first licensed as G4HJT while in school. He took a break from radio and reentered the hobby as K3EL since the mid-2000s. Dave now enjoys CW rag chewing, occasional contesting, SOTA (chasing and activating), chasing DX, and when possible, being DX. His DX activities include ZL9HR, Campbell Island in 2012, TX5RV, Austral Islands, in 2013, VK9MT, Mellish Reef in 2014, the 2016 Heard Island DXpedition VK0EK (radio team lead), TX5EG, Marquesas, 2017  and the 2018 VP6D Ducie Island DXpedition (expedition lead). Dave is a life member of the ARRL, a member of the Frankford Radio Club, A-1 Ops, the Chiltern DX Club and NCDXF.

Les discovered ham radio with some high school friends and became K2SHL when he got his General. He became interested in DX and discovered that contests were a great way to find more DX and started contesting in the early 1970’s. In 1996 he received W2LK.

In 1992, he operated from the US Virgin Islands for his first experience on the other end of a pileup. In 1998, he and his friend Steve Weinstein, K2WE, were the first Americans licensed to operate from Vietnam since the war as 3W6LK and 3W6WE. Since then for CQWW CW, he has operated from J7, KH6, CT9 and V3 and for many years from K2LE and W2AX in Vermont. In 2011 he was part of the VK9HR Lord Howe expedition and in 2012, ZL9HR on Campbell Island, the VK9MT Mellish Reef team in 2014, TX3X Chesterfield Island and VP6D Ducie Island in 2018. He is active on all bands from 160 to 6 meters and particularly likes 160 and 80 meter DXing.

He is a member of CW-ops (726), North Jersey DX Association, Hudson Valley Contesters and Dxers, Order of Boiled Owls of NY, the Yankee Clipper Contest Club and ODXG.

Professionally, he started his career with IBM as a programmer, worked in several banks and brokerages and eventually ran a successful consulting and staffing business with his wife, Barbara.

He’s an avid DXer and an occasional contester. His DXCC count is 354 confirmed (mixed) with all current DXCC entities confirmed. Gene’s radio interest has always been DXing with occasional diversions into restoring vintage radios and the digital modes.

A member of the 2012 ZL9HR Campbell Island DX-pedition, 2014 VK9MT Mellish Reef team, TX3X Chesterfield Islands in 2015 and 2018 VP6D Ducie Island team. He also holds call signs ZL1NA and VK2IXC. Gene retired from the Information Technology industry in 2012, he and his wife moved from Colorado to Tucson, Arizona in Sept. 2016.

Arliss has an MD degree, board certified in internal medicine, with 26 years of experience in emergency medicine. Undergraduate work includes BS degrees in wildlife science and mathematics. His previous Antarctic experience consists of 1 year at the Amundsen-Scott South Pole station (1981-82) as the communications coordinator. Sub-Antarctic experience includes expeditions to South Georgia Island, Southern Thule Island in the South Sandwich Islands and Heard Island, all in 2016. He has also been to the environmentally sensitive areas of Easter Island and St. Paul Island (Canada), and served as an official observer for the National Marine Fisheries Service aboard foreign fishing vessels operating in the Bering Sea. Other exposure to environmentally sensitive areas include hiking the 2,650 mile Pacific Crest Trail in 2016.

Heye was born in 1946 and licensed at the age of 18. He is primarily qrv in cw on the short-waves, his main interest lies in DXing.

Retired since 2011 he was an engineer in the research and development department of a medical-supply company that produces equipment and systems for intensive care and anesthesia workstations. Education: Electrical Engineering (Communications Engineering).

Laci is a 53 years old university professor living near Debrecen city, Hungary. Laci grew up in eastern Hungary, he was originally licensed as HA0NAR in 1986. He also holds contest call HG0R and K0NAR. Laci enjoys DXing, lowbands and contesting. He was a fox-hunting racer in school and continued to race until retiring from that sport in 1990.

He enjoys operating CW, SSB and RTTY. His best single op contest result was world 1st place in the IARU HF World Championship in 2010 low power, mixed mode (as HG0R). He has participated in the HG0D and HG7T multi-op efforts, with a number of top 3 placings. He holds several IOTA contest world records as SX8R and SW8LR. He enjoys contests and pile-ups, regardless of the mode.

Previously employed by the University of Debrecen, Department of Plant Protection as an assistant lecturer he is now an associate professor in the field of integrated plant protection.

In 1992 he started scientific work in the field of engineering of intelligent decision-making support systems. In 1993 he founded his first company. Нe is running his own consumer electronics distribution company starting 1994 till present day.

Walt was licensed as a Novice in 1959 as WV6HUR. His introduction to radio was a 40M dipole, single tube oscillator / transmitter and an entry level Heath receiver.

He subsequently upgraded to WA6HUR and in the 80s to the call of N6XG. He is a member of the Northern California Contest Club.

He has degrees in Engineering, Mathematics and Business Management. Walt in his 24 years at IBM had the good fortune of living and operating in Germany and Japan. In Japan he was licensed as 7J1AAM. Subsequent to IBM he was the head of a large electronic contract manufacturing company.

Upon his retirement in 2000 he has traveled and operated extensively throughout the world on vacation style DXpeditions. In 2001 he joined “Team Vertical” and has been on five DXpeditions to 6Y, 2 DXpeditions to C6, TX3X and VP6D.

Robert Fanfant graduated from both U of WA and Washington State University with degrees in Electrical Engineering and Material Science.

He worked at Intel Corp manufacturing computer chips, transitioning into software development. Retired in 2014 after a successful career at Applied Microsystem, Microsoft and software consulting. He obtained his novice license (WB7TDU) when 14 years of age, eventually obtaining his Extra license in the mid 90’s. His primary passion is combining his love of travel and chasing DX. Retirement has enabled him to also give back to the amateur radio community by also becoming the “DX”. His other passions include landscape photography, motorcycle adventure touring, gardening and spending time with family and friends.

Steve, W1SRD is from Northern California and was first licensed in 1974. He is a past president of NCCC and an active contester and DX’er. Prior  operations include KH6/W1SRD, PJ4/W1SRD, PJ4D and several CQP county expeditions. He enjoys station building, contesting in all modes and working towards Honor Roll (316 confirmed). He was recently the coordinator for W1AW/6 #2 which produced 48K QSO’s from 45 stations statewide. Sometimes in WPX he can be heard signing AG1RL, borrowing his very supportive XYL’s call.

Mike, originally from Moscow, Russia, has lived in the USA for the past 22 years. First licensed as UA3AIW, he operated mostly from UK3ABF, UK3ACL, and other club stations in Moscow. In 1998 he received AD6GY and WA6O in 1999. He’s a member of Northern California Contest Club, and 40m captain in N6RO contest team.

Over the years he participated in many CW contests from DX locations – with “Team Vertical” from Jamaica, Fiji, Bahamas as 6Y2A, 6Y8A, 6Y9A, 3D2XA, 3D2OK, C6AAW. He also operated from HC8N, Galapagos. Since 2003 he held a CQWW CW NA record in Single Op/Single Band (15)/Low power category.

His non-contesting DX trips include: CE0Y/WA6O, FO0SHA, ZK1WAL. Most recently he was part of the Clipperton 2013, VK9MT Mellish Reef 2014, TX3X Chesterfield Island DX-pedition team and the VP6D Ducie Island 2018 DX-Pedition. In his professional life, he is a software engineer with Ph.D. in computer science. He works for a technology start-up in California. Mike is married and has two sons.

Ken and several Hamburg, New York junior high school friends were captured by amateur radio in 1955.  He was licensed KN2OZZ, then K2OZZ and later NG2H. His first station was a 25 watt crystal controlled Heathkit AT-1 transmitter, a military surplus receiver BC-455, and 40 meter half wave dipole.

In 1958 he entered engineering school through Navy ROTC at the University of Louisville (Kentucky). Upon graduating, one of his favorite Navy assignments was submarine Communications Officer back when almost everything was still CW and HF.

Over the years he has been active in the CW traffic nets, contesting at Steve NR4M’s station, and DXing. Ken is a member of CWOps (1477), FISTS (16869), NAQCC (7560), and SKCC (12740), he is a member of the Potomac Valley Radio Club (Rappahannock Chapter), Fluvanna County Virginia ARES, and past member of the Pentagon Amateur Radio Club.

Hans-Peter HB9BXE is 70 years old and married to Maya. They have a daughter, Gabriela and son, Philipp. Hans-Peter is a development engineer and works for a company that manufactures electronic components. In fact, most of his amateur radio equipment is homebrew.

Licensed in 1978, he enjoys DXing and Contesting mostly on CW. He is a lifetime member in the Swiss DX Foundation (SDXF), member of USKA, HTC, and he is on DXCC Honor Roll. 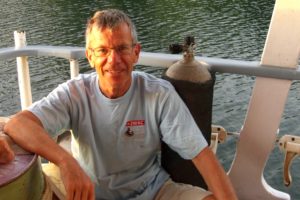 In 2004 he was QRV from top of Kilimanjaro, Uhuru Peak, 5895m above sea level. Probably this is the first successful DXpedition from Africa’s highest mountain. QSO Total 52 mainly EU

Other interests include: cycling in the mountain and roads, approx. 7`000 km/Y

Originally from Scotland, Alan has lived in Perth, Western Australia for many years and was first licensed as G4EEL in 1975 whilst studying for his commercial Merchant Marine Radio Officer ticket. He holds degrees in Physics & Telecoms Engineering and is a consultant telecom engineer in the offshore oil and gas industry.

An A1 CW Op, he gave many an all time new one as VKØMM from Macquarie Island over the year 2000 and was also a member of the 2016 VKØEK Heard Island team.  When not pounding away on a Morse key, Alan plays a mean bluegrass banjo.